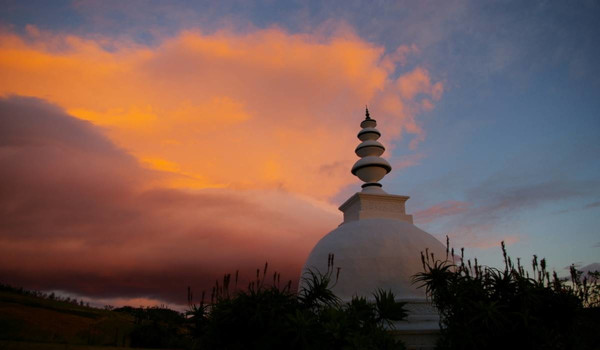 As some of you know, I employed a wonderful Induna, Vikimpi Mbanjwa, who helped me build the Centre. I recall affectionately his question when he attended one of Godwin Samaratna’s meditation sessions: “Why are we encouraged to watch our breath when it comes so naturally?” Mbanjwa - as he liked to be called - and I became firm friends over the course of the 25 years he was in my employment - a wise, loyal man - and mentor. What a privilege it was to work side by side with him, building the Centre over those first arduous 10 years.

Simply watching our breath is what we do in the most fundamental formulation of Anapanasati - Mindfulness Meditation practice - as it was formulated by the Buddha more than 25 centuries ago. It is no exaggeration to say that the entire body of the Buddha’s teachings is rooted in this ability to still the rush of thoughts, projections and imaginations that relentlessly assault us, day and night - even in our dreams. We have become helpless victims of this fake reality. We have come to accept it as normal, because we are all involved in it - all of us contributing to the magic show. We are actors in a collective pantomime performance. This is similar to believing your dream of being chased by a lion while you are safely tucked under your blanket.

So what was my response to Mbanjwa?

He was quite satisfied with this Zen response. He just slapped his thigh, laughed and carried on working. That was Zen as well.

Another memorable occasion was when Mbanjwa admonished me as I was about to close up the last opening in the dome of the newly-built Stupa/ pagoda. He was aghast that it would not have a door to let people in and out. When I explained to him that it didn’t need one, and that the space within was something akin to the space that allowed God to be simultaneously within and without, he understood and happily cemented up the opening. So there the Stupa stands today, with the spire somewhat tilted by a lightning strike. Which reminds me of the story of a guest who mistook the Stupa for the Kuti (the hillside bungalow), and, like Mbanwa, was puzzled to find that there was no door....

I have very fond memories of Mbanjwa riding to work on his horse “Garage” - looking dapper and proud. I have always been under the impression that he established the old stone kraal at the bottom of the valley along the "Gavin Relly Walk". He owned a large herd of cattle which would be released every morning to graze on the hills below the Centre. Recently, the overgrown bush and masses of lantana which had hidden the kraal for many years, were cleared. To our surprise we found that we may have uncovered something much older than a cattle kraal. An ancient stone circle perhaps? An archaeologist is interested to see it and backdate it.

Such is the mystery of this Ufafa valley, one of the few remaining traditional rural areas left in KwaZulu Natal. Where one can hear the heartbeat of drums echoing up the hills at night. And the distant sound of singing from the Zionist church congregation , and feel the goodwill of a solid community. This is the valley where Alan Paton situated his book “Cry The Beloved Country”, and the area where Chief Justice Raymond Zondo grew up. I feel fortunate to have been here for half a century and to have shared this space with so many visitors and retreatants.

I am so grateful that I made the decision as a young graduate to leave the safe shores of Holland on a Union Castle ship and sailed for the unpredictable shores of South Africa - some 63 years ago.

An extract from Thabo Mbeki’s “I am an African” sums up much of how I still feel about rooting myself here.

"I am an African. I owe my being to the hills and the valleys, the mountains and the glades, the rivers, the deserts, the trees, the flowers, the seas and the ever-changing seasons that define the face of our native land. My body has frozen in our frosts and in our latter day snows. It has thawed in the warmth of our sunshine and melted in the heat of the midday sun. The crack and the rumble of the summer thunders, lashed by startling lightening, have been a cause both of trembling and of hope. The fragrances of nature have been as pleasant to us as the sight of the wild blooms of the citizens of the veld.

The dramatic shapes of the Drakensberg, the soil-coloured waters of the Lekoa, iGqili noThukela, and the sands of the Kgalagadi, have all been panels of the set on the natural stage on which we act out the foolish deeds of the theatre of our day. At times, and in fear, I have wondered whether I should concede equal citizenship of our country to the leopard and the lion, the elephant and the springbok, the hyena, the black mamba and the pestilential mosquito."