We are sad to have taken our leave from Tessa Pretorius.  She has managed our finances for almost four years.

It is in the nature of retreat centres like the BRC to have to live with staff changes.  Indeed, few people look upon a post at the Centre as more than an episode between other moves in their lives.

We are - sometimes grudgingly - happy to provide such a psychological interlude for people to re-assess where they have come from and where they need to go.  Many visitors and retreatants do the same.

Maybe that is what the BRC – and the Buddha’s teachings - are about. 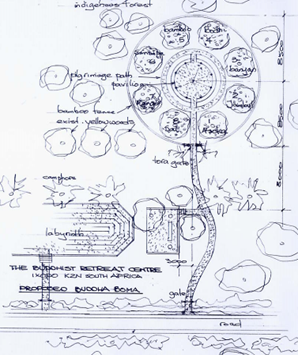 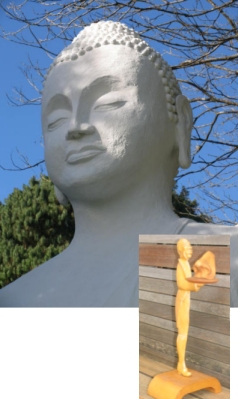 Although I have been involved in various forms of art since an early age, I had never undertaken any sculpting before I agreed to build this Buddha statue. True, I had intended to do so – one day…

When a visiting monk, Ajahn Anando, heard this he challenged me to do so – now. He said he would mix the mortar for me. Indeed, he helped in the early stages of its construction, welding together the armature around which the concrete and plaster were going to be modelled. Anando was a delight to work with but he left shortly afterwards, back to Chithurst Forest Monastery in England of which he was the Abbot.

I felt somewhat intimidated by the prospect of sculpting such a huge statue. So I asked Peter Schütz, a good friend of mine and an internationally renowned sculptor, to help me model it – well, at least the face. But he only offered to do the nose for me. Why only the nose, I never found out. You could never be sure you could take Peter seriously.

He was a busy man, lecturing at university and forever preparing pieces for exhibitions of his work. So I was left on my own. I had to complete the five meter high statue myself, including the face. And that nose.

Years later, the Buddha statue completed, Peter had a run of exhibitions in which he explored the many-layered interfaces between baroque saints and the symbolism of the “dumb waiter”. One day he turned up at my house, with his customary bottle of red wine in one hand and a parcel, wrapped in brown paper, in the other. He gave it to me with a shy smile.

It was a dumb waiter, offering the Buddha’s nose on a platter…