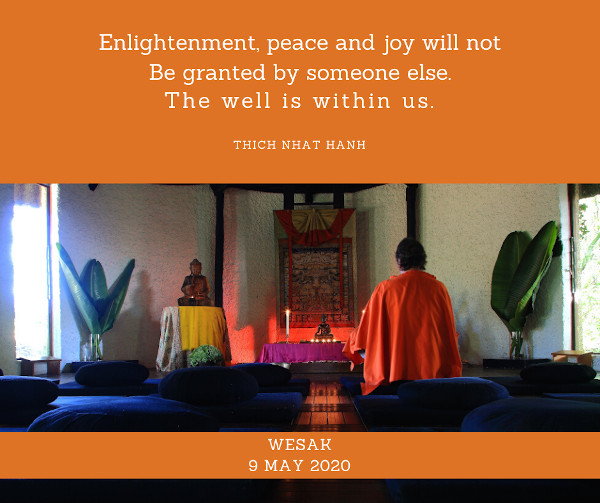 Sadly, the road to Ixopo will be undriven this year as South Africa and the world grapples with the Corona virus pandemic. In conformity with the national lockdown the retreat centre is closed. An added sadness is that this year’s retreat was also intended to mark the 40th anniversary of the centre opening its doors in 1980.

That milestone aside the retreat would have followed its typical programme of sitting and walking meditation with talks and reflections in the studio around the fireside, but the real heart of the retreat is the ceremony which takes place in the evening, beginning in the meditation hall before moving outside into the gardens for a traditional circumambulation of the Buddha statue.

The ceremony in the hall has taken various forms over the years – in 1992 Antony Osler, who led the retreat with Louis that year, handed out sayings and poems to be read aloud by retreatants as they sat in a large circle, one reader passing a candle to the next. Here’s a poem from Ryokan read on that night:

At night, deep in the mountains I sit in meditation.
The affairs of the world never reach here.
In the stillness I sit on a cushion across from the empty window.
The incense has been swallowed up by the endless night;
My robe has become a garment of white dew.
Unable to sleep, I walk into the garden;
Suddenly, above the highest peak, the round moon appears.

In 2005 Louis kindly invited me to join him in leading the Wesak retreat and, barring an odd year or two, we have done so ever since – Antony joined us in 2010 for the Wesak retreat marking the centre’s 30th anniversary; only fitting as he was its first resident manager and teacher back in 1980.

Over the last few years the ceremony in the hall has coalesced into a set pattern: a period of silent meditation followed by a reading of the relevant chapters from Thich Nhat Hanh’s Old Path, White Clouds describing the Buddha’s enlightenment. Then we go outside into the cool (if not cold) May evening where scores of plain brown paper bags half-filled with sand and planted with a candle light a path to and around the Buddha statue.

As the retreatants leave the hall each is given a lit stick of incense as they form a single line, one behind the other, and walk the illuminated pathway into the garden towards the Buddha statue and, as is the tradition all over the world, circumambulate the statue three times. After the final turn each person places their incense stick in a bowl at the statue’s feet, bows, and steps back to form a group facing the Buddha. When all are gathered together Louis chants some Pali verses and these are likely followed by English versions of the Heart Sutra or the Metta Sutra. Then silence. On a clear night – not always guaranteed at Ixopo in May - the moon shines full and the star-spangled haze of the Milky Way is a silver scarf thrown across the sky. If you are lucky you might hear the call of an eagle owl.

Gradually, one by one, or in small groups, people move away towards the studio. Tea and cake awaits – even the one the Buddha ate.
The silence closes in again as the retreatants wend their way to bed. The candles around the Buddha still aglow.
We are unable to celebrate Wesak at the Buddhist Retreat Centre this year – as well as the centre’s 40th anniversary – but as we mark the festival, each in our own way, we will hold the centre in our hearts as well as all those who live and work there. There will come another autumn, the grasses will seed again, and the round moon will appear.