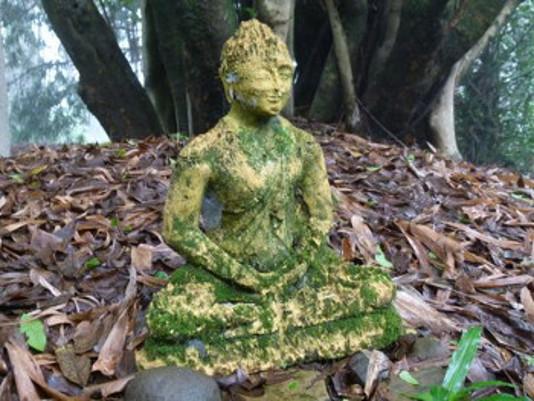 These early Buddhist sites had been overrun by the indigenous forests surrounding them. They were discovered accidentally in the late 19th century by English hunters whilst pursuing their quarry. By then, vegetation had found ready footholds in the many hollows and crevasses in these massive sandstone carvings, some as tall as five-storey buildings. The Buddhas and his disciples were now covered in moss, and had shrubs growing between their toes and weeds sprouting from their ears and nostrils. Teak trees had split apart pagodas.

How large is large?

I decided that the BRC Buddha would have to be tall enough to be proportionate to its surroundings - the landscape around it. But - how large is a landscape? The size of the lawn on which it stands? The hill on which it sits? Lufafa valley, which it overlooks? In the end, my decision to make it 5 metres high was therefore a matter, not so much of my reasoning head, but of the feeling in my guts.

I first sculpted a small version of this large Buddha - a 50 cm tall clay maquette 30 years ago. It gave me a guide to how to model the concrete Buddha, 10 times larger. Upon completion, when the scaffold was taken down around the statue, someone had placed the maquette on a flat rock in the shade of a tree overhanging our zen Garden. Lovely: the Buddha had become a Zen Roshi, meditating on the rocks and the furrows in the sand. There in those moist shady conditions, it was quickly covered in moss. We admired it as it gradually dissolved - back into its natural surroundings. However, our Zulu gardener noticed the moss and showed unusual initiative. He decided this Buddha had got dirty. He therefore scrubbed it meticulously clean, removed all traces of moss and painted it stark white! He proudly showed us his handiwork: a spanking clean but heavily pockmarked Buddha. He was clearly surprised to find that Chrisi and I seemed somewhat subdued about what he had done.

We decided that we should try and reintroduce the moss on the statue. Our chef, came to the rescue and suggested using a “moss smoothie”. We therefore made a yoghurt-moss smoothie and, whilst chanting the Buddhist Threefold Refuge, smeared the green goo all-over the Buddha. We placed him back on his stone seat in the forest and wished him well… The moss grew back. So - there the Buddha sits today, slowly dissolving again - back into the soil from whence he came. Earth to earth. And moss to moss, And not a gardener in sight…